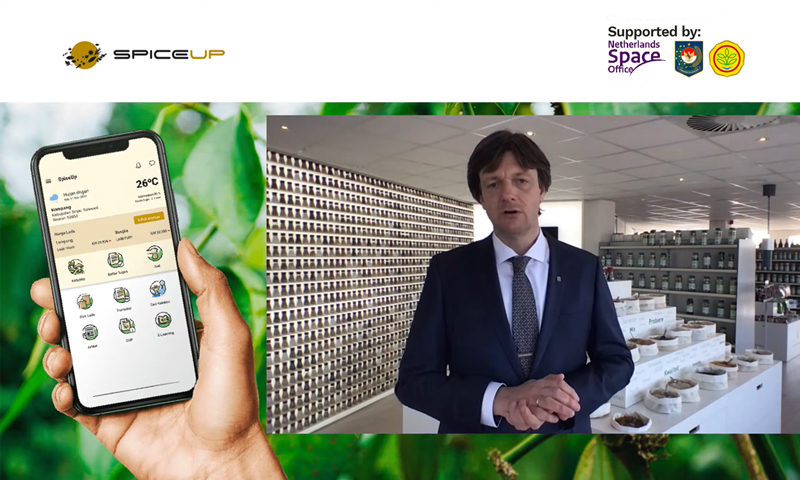 The SpiceUp App Launch was conducted virtually on 1st April 2021. The aim of the event was to introduce the SpiceUp App to the public, and to promote its support from various stakeholders. The event was attended by various sectors across Indonesia and Europe. The guests of honor included the Indonesian Ministry of Home Affairs, the Indonesian Ministry of Agriculture, Embassy of The Republic of Indonesia in Brussels Belgium Accredited to Luxembourg and European Union, the Embassy of the Republic of Indonesia to the Netherlands, Embassy of the Kingdom of the Netherlands in Indonesia, provincial government offices from Lampung, Bangka Belitung, and West Kalimantan and East Kalimantan, universities, international organizations, SpiceUp consortium partners and Civil Society Organizations (CSOs). The SpiceUp App Launch was nationally covered by highly reputable media sites such as Antara News , Tribun News, Media Indonesia, Liputan 6 , amongst others. The coverage of the launch was also concentrated in the local media of major pepper producing areas in Indonesia, including East Kalimantan and West Kalimantan, Bangka Belitung, and South Sumatera, such as Suara Balikpapan , Kapuas Raya Today , Berita Sumatera, ,Suara Bangka, and many others.

The event was opened by a welcoming speech from the CEO of Verstegen Spices and Sauces B.V., Michel Driessen, who introduced the SpiceUp App, followed by Lenneke Braam, Asia Cluster Director from ICCO, who introduced the SpiceUp project in Indonesia. Following the SpiceUp partners, representatives from embassies and the national government also gave opening speeches. H.E. Dr. Andri Hadi, Ambassador of the Republic of Indonesia to the Kingdom of Belgium, the Grand Duchy Luxembourg and Mission to European Union, Mr. Joost van Uum, Agriculture Counsellor of the Embassy of the Kingdom of the Netherlands in Indonesia, and Mr. Fikry Cassidy, Deputy Chief of Mission to the Embassy of the Republic of Indonesia to the Netherlands, all highlighted the importance of utilizing technological innovations to support sustainable farming practices in Indonesia and to strengthen the collaboration between stakeholders to support the SpiceUp App to further promote Indonesian spices globally. The timely launch of the App was also emphasized in the wake of EU-Indonesia relations in sustainable agricultural practices and environmental protection. Dr. Agus Fathoni from the Research and Development of The Indonesian Ministry of Home Affairs, and Dr. Ir. Fadjry Djufry, M.Si from the Research and Development of The Indonesian Ministry of Agriculture, also presented speeches highlighting the importance of SpiceUp’s technology in improving farmers’ welfare and promoting technological innovation in all layers of society. For the main event, the SpiceUp App was ceremoniously launched by Dr. Agus Fathoni, Dr. Ir. Fadjry Djufry, M.Si, H.E. Dr. Andri Hadi, and Mr. Fikry Cassidy, which was followed by a video presentation about the workings of the App and testimonies from farmers who have benefitted in using the services, which provides comprehensive information regarding pepper price, GAP, and pest and disease control.

The event included  interactive discussion sessions with local governments, academicians, CSOs, and the private sector. Ir. Fahrizal Darminto, M.A, Lampung Province Secretary, stated that the launch of the SpiceUp App is aligned with Lampung’s vision to digitalize the agriculture sector, so farmers can gain the benefits through innovation, gain more knowledge and market access to increase their welfare. Mr. Naloanro from the Sustainable Spices Initiative-Indonesia and Dr Wahida Maghraby, researcher at the Indonesian Ministry of Agriculture, stated that the SpiceUp App greatly supports farmers and agricultural research in terms of promoting GAP, traceability, price transparency, and market accessibility. Indonesia can be more prepared in facing requirements demanded by the country’s pepper export destinations, as the App provides an efficient method that shows the transparency of farming practices, production, and distribution.

The event ended with a final statement from the private sector. Mr. Thomas Mulder from CATZ emphasized the benefits of geodata for businesses. As businesses are unable to work with farmers directly, SpiceUp’s ability to zoom in on the farmer level is tremendously significant. One of the main advantages of the App is its capacity to become a tool that can predict how products will develop by showing historical weather data, crop sizes, and weather forecasting.

You can watch the full recording of the launch on SpiceUp’s youtube channel! The SpiceUp App is now available to download on Google Play Store Download the app today and enjoy increased benefits for your pepper farm and business!

Mr. Syamsul, a pepper farmer from the Sambas Regency in West Kalimantan, is optimistic about the o...
SpiceUp ®2023 ALL RIGHTS RESERVED